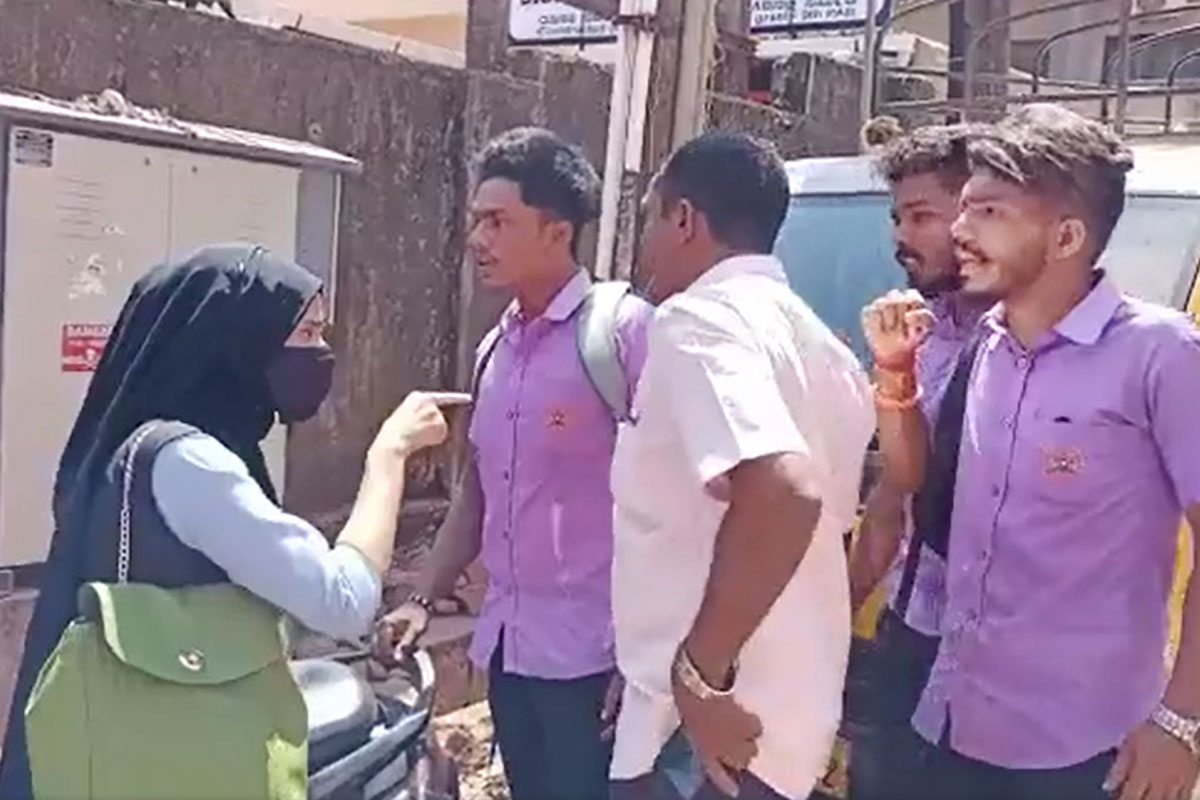 Two FIRs have been registered by Mangaluru Police against opposing groups of Hindu and Muslim students following an altercation last week.

A government college in Mangaluru has decided to move all of its classes online after a dispute over allowing students to wear hijab in class escalated last week. P Dayananda Pai P Sathish Pai Government First Grade College in Mangaluru has taken the decision to suspend classes on campus after two FIRs were registered by Mangaluru Police against opposing groups of Hindu and Muslim students following a an altercation outside the college.

Trouble began on Friday when a Muslim girl was confronted by her Hindu classmates as she entered college to take an exam. Hiba Sheikh, a second-year undergraduate student, says a group of ABVP boys tried to stop her from taking her internal exam and called her ‘anti-national’ and ‘terrorist’ . During the confrontation, Hiba was seen arguing with three boys in the presence of police officers. Hiba was heard asking the boys, “Is this your father’s college? We also pay fees and come here.” The altercation was broken up by college authorities and police personnel.

An FIR has been registered at Mangaluru North Police Station based on a complaint filed by Hiba accusing ABVP boys Nithesh Shetty, Samanth Alva, Sanath Shetty, Sandesh and others of insulting and injuring the young Muslim.

Hiba’s complaint was followed by a counter-complaint from Kavana Shetty, a bachelor of commerce student at the college, accusing Muslim students Hiba, Saina, Mumthaz, Rifana, Nisar, Alfaz and Aboobakkar of intimidating and hurting the Hindu students. “Did you talk to a teacher and stop us from taking the test?” We’ll see you when you go on the road, does the college belong to your father? We also pay a fee and come,” Hiba told the boys according to the complaint. The complaint also added that Sandesh, one of the boys, had received death threats on social media, although it was not clear who made those threats.

In response to the counter-complaint, Hiba stated that Complainant Kavana is the secretary of the college’s ABVP and that the complaint against her was without merit. “It is clearly visible in the video that ABVP Secretary Kavana Shetty was nowhere near where the incident occurred. This FIR against me and my innocent college mates is a baseless allegation,” Hiba said. Kavana Shetty declined to discuss the incident when contacted by TNM.

The college principal, Rajashekara Hebbar, said the college allowed some Muslim students to enter the library wearing hijab. “Until the recent conflict in Udupi, there were a few Muslim girls who did not wear hijab in class, but now all Muslim girls come to university wearing hijab. We had allowed a few girls into the library to an internal exam on Thursday, but some boys confronted her when she was coming to college,” Rajashekara Hebbar told TNM.

Following the conflict on campus, the principal suspended offline classes and started online classes until the tension subsides in the college “We ask the girls to follow the government order and the directive of the High Court. We had only allowed him to take an internal exam in the There is confusion because different college committees in the district make different decisions on allowing students into the library. We have now decided to follow online classes until the situation is resolved,” Rajashekara Hebbar said.

The hijab row in Karnataka erupted at a government college in Udupi when the college denied permission for six students to wear hijab in class in December 2021. The students approached the Karnataka High Court on January 31 to demanding to wear hijab on campus and soon, saffron shawl protests were taking place in Kundapur, Baindur and Udupi colleges by Hindu students campaigning against their Muslim classmates. The state government passed an ordinance on February 5 delegating power to decide on school uniform to College Development Committees (CDCs), which effectively led to a ban on hijab in many colleges in Karnataka.

Currently, dozens of Muslim students in colleges in Udupi and Dakshina Kannada have avoided exams in their colleges following the decision to ban hijab inside the classroom. Colleges in both districts have a heavy police presence monitoring Muslim students who arrive on campus wearing the hijab.